The research and creation of this present project, which won first place from around 70 other entries, as it met with the aims of the programme, was supported by the Hellenic Foundation for Research & Innovation (H.F.R.I) as part of the initiative “Science and Society”- “200 Years since the Greek Revolution”. The contribution of the H.F.R.I. is pivotal in the presentation of such a large piece of work through a series of concurrent initiatives.

The coordination of the work was taken on by the department of Cultural Technology and Communication and ELKE (SARG – Special Accounts for Research Grants) of the University of the Aegean.

This whole endeavour comes under the aegis of the National Historical Museum, the prime custodian of Modern Greek history. A large proportion of its sources, archival material and visual art works constituted templates for illustration or worked as proofs for the illustrations.

The Stratis Eleftheriadis- Tėriade Museum Library in Lesvos is participating in the promotion and publicising of the project, while the contributions of the Benaki Museum and the Athens Museum of Criminology in the research and promotion of specific works, have been invaluable. We thank them all warmly. 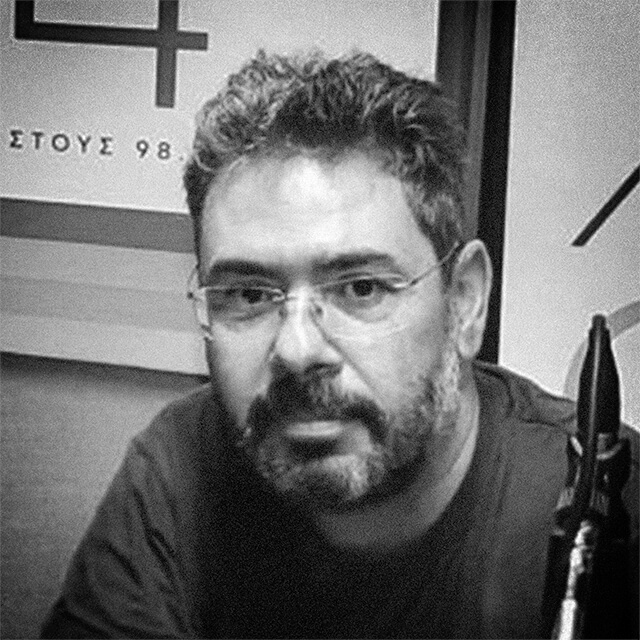 Soloup is a political cartoonist (satirical and political newspaper “To Pondiki” and street magazine “Sxedia”) and a comic book creator.  He studied Political Sciences at Panteion University and is a Ph.D in the department of Cultural Technology and Communication at the University of the Aegean. His post-doctoral research is on the depiction of the Greek Revolution from the year 1800 to the present day as viewed through the visual arts, prints, comics etc. The 1821 graphic novel is part of this research.

Up to now, 14 albums with political cartoons and comics, a study named “Greek Comics” (Topos publishing) have been released. His first graphic novel “Aivali” (Kedros publishing) has been awarded “Best Comic of 2015” and “Best Script” at the Greek Comics Awards and has been awarded the “Coup de Coeur 2016” in the 17th Festival of Rendez-vous du Carnet De Voyage (Clermont Ferrand/ France); it has been translated into French (Steinkis publishing), Turkish (Istos publishing) and English (Somerset Hall Press) while a Spanish edition is also under way. His second graphic novel “The Collector: six short stories about a bad wolf” was released in 2015 (Ikaros publishing) while the movie “Soursouris” is based on the eponymous chapter of the work. Original pages and other visual materials of “Aivali” and “The Collector” were exhibited at the Benaki Museum on Peiraios Street in 2015 and 2019, respectively. 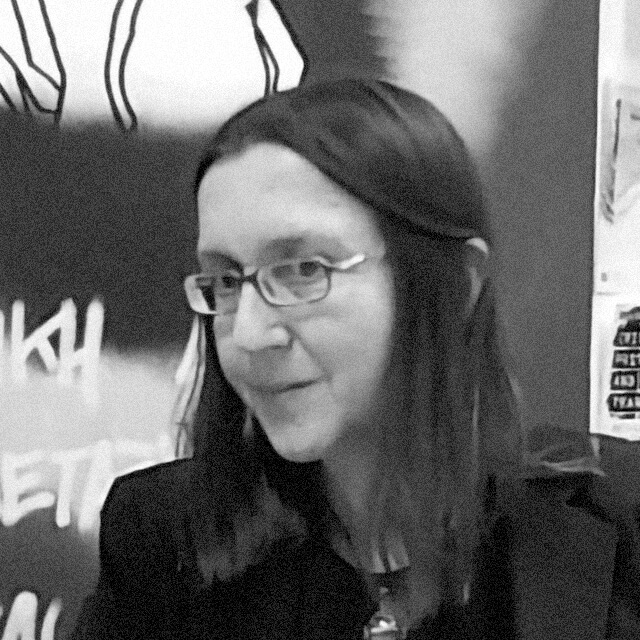 Evi Sampanikou has been a professor in the department of Cultural Technology and Communication of the University of the Aegeansince 2000. She also collaborates with the Hellenic Open University. After having completed her bachelor studies in Archeology and English Literature and her doctorate in Art History (in post-byzantine painting), she focused her research interest on photography, the art of comics and new mediums. Since 2009 her research has been directed towards post-humanism and she is thus a founding member of the international Beyond Humanism Network. 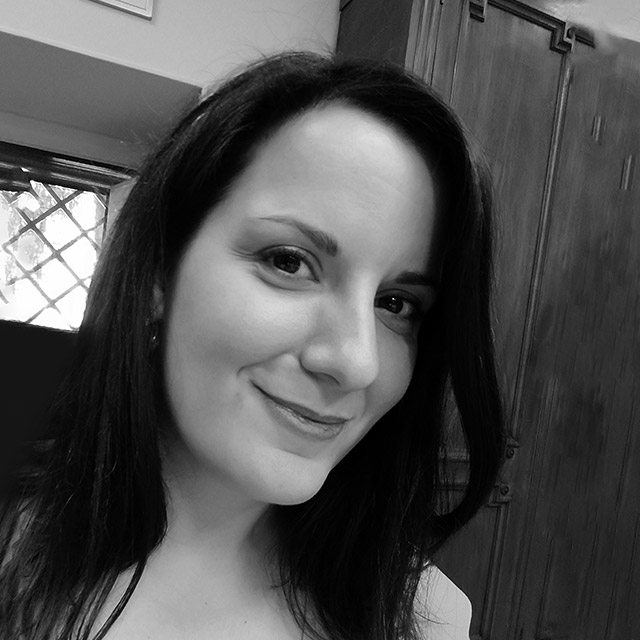 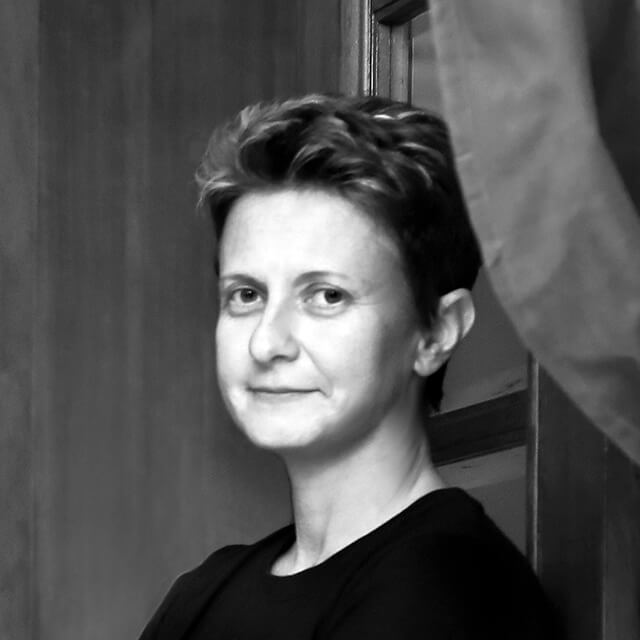 A graduate of the department of History and Archaeology of the National and Kapodistrian University of Athens. In 2002 she completed her post-graduate studies in Art History at the University of Nanterre in Paris.

She has been working at the National Historical Museum (NHM) since 1995, at first as an intern, then from 1997 on as a permanent academic associate and curator. Since 2010 she has been the curator responsible for all the museum’s collections.

She has curated exhibitions within the framework of initiatives undertaken by NHM, but also of other bodies (the B & Μ Theoharakis Foundation for the Fine Arts and Music, the Coumandaros Art Gallery Sparta- branch of the National Gallery). She has participated in conferences and has published articles in NHM’s academic journal Tekmiria Istorias, in newspapers and magazines and collected publications. She is a member of the academic team for the graphic novel “21. The Battle of the Square”. In addition, she has written and edited historical publications and albums, as well as exhibition catalogues. 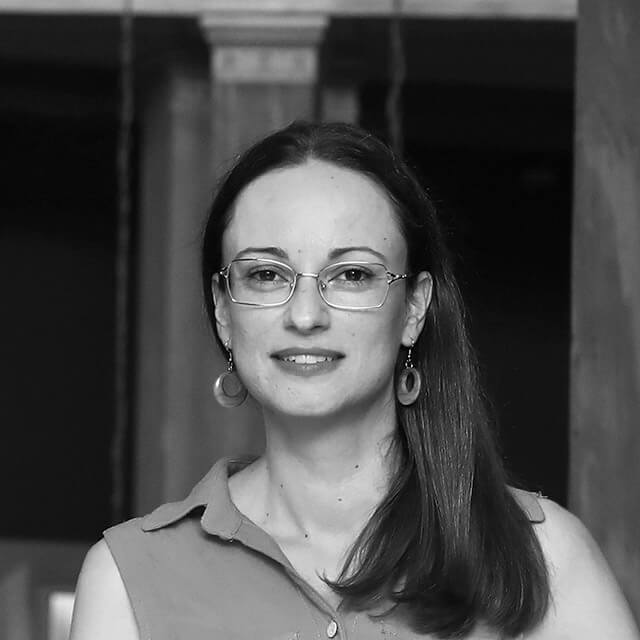 A graduate of the department of History and Archaeology of the National and Kapodistrian University of Athens and now a Ph.D in that same department, with post-graduate studies in classical archaeology. Since 2000 she has been working at the National Historical Museum (NHM), originally as a volunteer, and from 2005 on as a permanent academic associate, curator of the museum’s collections of ceramics, seals and coins and as an affiliate for the library of rare books and the engravings collection. She has taken part in the preparation of exhibitions at the NHM and in collaboration with other actors, she has published articles in NHM’s academic journal, Tekmiria Istorias. She has participated in collected publications, exhibition catalogues and in the creation of the graphic novel “21. The Battle of the Square”. She has also written historical books- activity books for children and she takes part in the organization of children’s educational workshops. She is responsible for the series of Greek translations of memoirs and pamphlets by philhellenes published by the Historical and Ethnological Society of Greece on occasion of the 200 years since the start of the Greek Revolution.