The setting of the graphic novel: The square 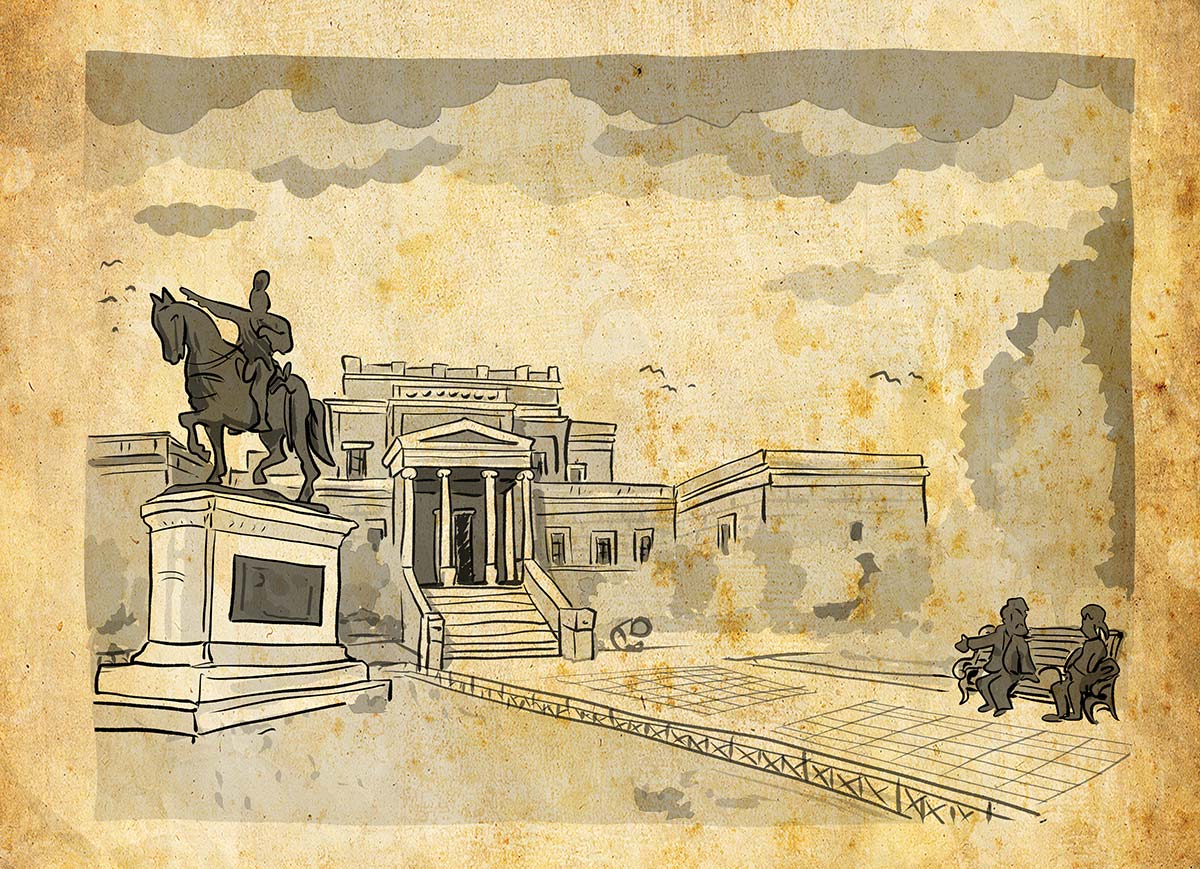 In the heart of Athens’ historical centre, between Stadiou, Kolokotroni, Anthimou Gazi and Christou Lada streets, is Kolokotroni Square. Its name, like the name of the street by its side, derives from the statue of the mounted commander in chief of the Revolution of 1821, Theodoros Kolokotronis, which was placed there in 1904. This place is inextricably linked to the political life of the new Greek state. Earlier, the home of Alexandros Kondostavros, a banker from Chios, was to be found there. It was used as King Otto’s first residence (1834-1836) and housed all parliament and senate meetings from 1834 to 1854. Subsequently, the construction took place of the neoclassical mansion, which for 60 years functioned as the first Greek House of Parliament.

As well as the statue of Kolokotronis, there are two more marble statues in the square: that of Harilaos Trikoupis, work of the sculptor Thomas Thomopoulos and the other of his political rival, Theodoros Diligiannis, work of the sculptor Georgios Dimitriadis (another… battle of the square). The first was placed in the courtyard of the then House of Parliament in 1920, on the side that looks out onto Stadiou street and in 1954 it was moved to where it currently stands, at the side of the building. The latter was placed in 1931 in the grounds of the parliament building (NE corner) in 1931 and in 1954 it was moved to its current position, to the right of the building’s entrance. These two men, who both served as prime ministers, played leading roles in the politics of the country during its first years of parliamentary life although Diligiannis was assassinated on the steps of the House of Parliament in 1905.

When the Kondostavros family home burnt down, the first Greek House of Parliament was built in its place. In 1858, the foundation for a building, designed by French architect François Boulanger to house the Parliament and the Senate, was laid by Queen Amalia. In 1862, the Senate was abolished, and the designs of the building were modified by the architect Panagiotis Kalkos. Up until the completion of the building (1875), the parliamentary body met in a flimsily built structure on the west side of today’s square, which became known as “I Paraga” (i.e. the shack). On 11th August 1875, the official commencement of parliamentary meetings took place, with Harilaos Trikoupis as prime minister. In 1935 the Greek Parliament moved to the Old Palace in Syntagma square. The building of the now Old Parliament was granted to the Historical and Ethnological Society of Greece so that they might house the National Historical Museum, which opened its exhibitions, in this current position, in 1962.